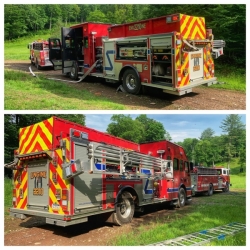 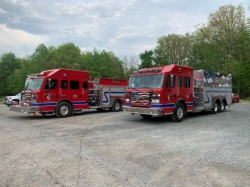 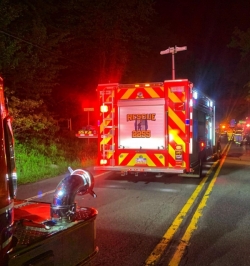 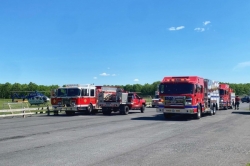 Tanker 2233, Engine 2210, and Command 2277 with twenty volunteers assisted District 12 and Lehighton ALS with a landing zone for LifeFlight 6 on Route 903.
Fire Glossary

Click a letter to view all entries that begin with that letter.

34 entries in the Fire Glossary beginning with "C"

Cellar fires are difficult to attack directly because firefighters have to pass through the hot gasses and smoke accumulated on the cellar's ceiling to gain access to the cellar space. Cellars typically do not have good emergency egress points, adding to the danger.

Cellar Nozzle. A distributing type nozzle that is inserted through an opening in the floor and into the space below, typically a basement or cellar. The nozzle directs a broken stream horizontally, either extinguishing or controlling the fire enough to allow a direct attack to be safely made. Can also be used on top of other containers.

A type of coupling used by the CFA, it is used mainly on the australian 64mm hose, it provides a very secure coupling, obviously the threading of the coupling is repeated 3 times, it is non-hemaphoradite.

Fire hose under pressure from the pump at the engine.

Fast and intense fire in a chimney flue in which accumulated creosote and other combustion byproducts ignite.

Classes of fire extinguisher and corresponding type of fire they extinguish.

An area in which specified activities or entry are temporarily restricted to reduce risk of human-caused fires.

Legal restriction, but not necessarily elimination, of specified activities such as smoking, camping, or entry that might cause fires in a given area.

Fire extinguisher that releases carbon dioxide gas to smother and cool a fire, such as a flammable liquid.

A method of controlling a partly dead fire edge by carefully inspecting and feeling with the hand for heat to detect any fire, digging out every live spot, and trenching any live edge.

The area around a structure that would contain debris if the building were to collapse.

A modern firefighting term for a dwelling that is so filled with trash and debris that it becomes a serious danger to the occupants and emergency responders.

A low pressure Fog Nozzle (usually 120 to 150 lbf/in? or 820 to 1030 [[kilopascal|kPa)) that can be adjusted to produce a near straight stream. Also commonly referred to as a Taskforce Tip (TFT).

Two or more firefighters organized as a team, led by a fire officer, and equipped to perform certain operational functions. Compare with platoon and unit.

An Isolated" fire or a fire which is "boxed in" or "closed off" from the rest of the structure. An example of this is a fire in a room where all the windows and doors are closed preventing the fire from spreading to other rooms.

Two or more individual incidents located in the same general area which are assigned to a single incident commander or unified command.

A water / sofactant (foam) mixture, with compressed air forced into the mix. The result is a very homogeneous, small air bubble" distribution; the resulting suppression agent is the consistency of soggy shaving cream consisting of relatively pure surface area and little actual water. CAF is gaining favor in selected compartmental fire scenarios because of its high (explosive) conversion rate on top of the penetrative advantages of the sofactant. It is also inappropriate for many fire scenarios because of that conversion rate

The least aggressive wildfire suppression strategy which can be expected to keep the fire within established boundaries of constructed firelines under prevailing conditions.

A moderately aggressive wildfire suppression strategy which can be expected to keep the fire within established boundaries of constructed firelines under prevailing conditions.

An inclusive term for all constructed or natural barriers and treated (retardant) fire edges used to control a fire.

A progressive line construction duty involving self-sufficient crews which build fireline until the end of the operational period, remain at or near the point while off duty (in a spike camp), and begin building fireline again the next operational period where they left off.

A pump capable of spraying foam used at airports.

34 entries in the Fire Glossary beginning with "C"